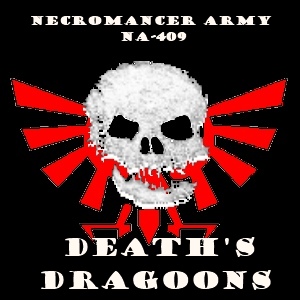 The NA-409th, or "Death's Dragoons" are a battalion of the Necromancer's Army who served in the military of the New Order of the Eye. They played a part in many of the major conflicts which the NOE participated in during 203 ABY+ .

Mortale formed the NA-409th as a specialized Elite unit to become his own personal strike-force, not unlike Vader's 501st Legion of Stormtroopers. In fact, it was the 501st which inspired Mortale to create a specialized force which he knew would remain loyal to him alone, regardless of any change in his standing in the NOE.

Each trooper was hand picked by the Jen'Derriphan based on their service records in the regulars, he even selected troopers from the commando program to be brought out and placed into his specialized unit.

The first official mission which was assigned to the unit was in 203 ABY when they were selected to travel to Hoth, upon arriving they participated in a search and rescue mission to aid Lord Dragus in his attempt to save Kaibur Malice and others from indigenous peoples and bests.

Soon after that they were present in the invasion of Hapes where they played a pivotal role in the disposing of the corrupt delegates and officials of the Hapan people. This secured the trust of the Queen Mother, and the cooperation and integration of the Hapan system into the NOE.

Following this, they were once again there to aid the Lord Dragus to defend the Citadel of the Eye from first a group of anarchists, then again from a resurrected horde of hate-zombies. It was the 409th who cut a path through the horde so that Dragus and his companions could make their way to the heart and core of the horde's hive-mind and destroy it. Immediately following the battle the Death's Dragoons disappeared as seemed to be their style. Most likely they were off to further carry out the will of the Jen'Derriphan.

Retrieved from "https://jvs.fandom.com/wiki/NA-409th?oldid=30901"
Community content is available under CC-BY-SA unless otherwise noted.