Gavin Terrik was born on Corellia as the son of Corellian spacers named Jace Terrik and Katrin Halikar. The family owned a farm in the Corellian Highlands but were mostly aboard ship which suited Gavin just fine, as he always hated the farmer's life. When Gavin was 13 he overheard his father speaking in urgent hushed tones on a com. His father then left, hugging him and kissing his head, and carrying a small box that he had never seen before. Gavin watched as his parents shared one last kiss and his mother cried. Gavin never heard from him again and it was then he started accompanying his mother on her ship.

When Gav was 14, he was with his mother while she went to Kessel on a spice run. While they were gone their ship the Gilded Lady was attacked and scuttled by pirates who left almost no survivors, Gavin and a Wookiee named Thorrorr who owed his mother a life debt were able to get on an escape pod with Thor bodily carried him kicking and screaming and shooting his Bryar Pistol while his mother and the crew tried to fight off the attackers, two of whom carried red blades of energy. He thought he had heard shouts and commands relating how they were coming for Gavin, and how it was essential he escape, but in the confusion he was unsure. As the escape pod launched, he could see a black fist on the side of the pirate vessel, a black fist he would always remember deep in his heart.

After a year of drifting from planet to planet with Thor and now orphaned, Gav inherited the farm and his parents decent wealth which was kept in a trust to be given to him in full when he turned 21. For the next two years he kept up on the farm with Thor's help but when he turned 17 he, in his eternal quest for adventure and excitement away from the doldrums of farming, gave the farm to Thor and released him from his life debt, then enlisted in the armed forces of The United Federation of Free Worlds.

At age 17 Gavin joined up with the legendary 57th Uplanders, famously known as "The Balls and Bayonets brigade" and served with distinction in multiple campaigns. During basic he distinguished himself as a marksman with pistol and rifle as well as hand to hand and knife combat. This prowess, surely aided by his untapped and unrecognized force sensitivity, got him accepted into commando training when Special Forces Sergeant Nic Furi got a look at his file and requisitioned him to be a part of the 57th's first commando team, known as Wolf Squad. Furi took him under his wing in what was considered to be an almost fatherly way and Gavin excelled in every training scenario. When the squad was officially formed, he was given the rank of Staff Sergeant and command of what would become one of the best known and highly decorated commando squads in the Federation. He received numerous commendations for prowess and valor, including the coveted first class bloodstripes for a classified action, and was offered a commission and career options. Gav, even though he had enjoyed his time, was ready to move on, so after 6 years in the service, he was discharged with honors and returned to Corellia, where he joined the Corellian Security Force.

Captain of the Ace of SabresEdit

Now age 27 and having inherited all his parent's money, Gav decided to undertake their trade, running cargo of various levels of legality to planets around the galaxy. He put his money into buying and refitting an old YT-1930 that he called Ace of Sabres. His old buddy Thor joined him and began a six year career traveling and getting into all manner of trouble. Perhaps most telling about him, was during his entire career he never performed a single illegal activity in UFFW territory, due to his oaths as a soldier to defend the peoples and laws of The United Federation of Free Worlds.

During this time, he participated in a variety of activities, including running guns and aiding various resistance movements.

Gav immediately took to the atmosphere of excitement and mystery at the academy, feeling refreshed and full of joy for the first time in two years. Even though he was quite old for a learner, he took to his lessons with the vigor of a being a third his age. It wasn't long before he learned to feel the force all around him, and showed remarkable acumen with the art of telekinesis, advancing in it quicker then he ever could have guessed he would. While sitting down for lunch, he met Master Arhiia Concordia, who was fresh from the battle of Korriban. They spoke at length, and he found that he enjoyed her company immensely. Master Concordia even offered to take him as a padawan, if the Corellian Masters would allow it.

A few days later, while sitting down for a quiet drink, he heard a loud explosion coming from the tracks. Rushing out to see if he could help he got on the train, only to find that it had been attacked by a criminal organization known as the Fist of Kast. Gavin leapt into action, using his training as a commando to easily take down his first opponent, only to be faced with a far more challenging one, a sith lord calling himself Darth Ion.

Not seeing a way out, Gavin ignited his training saber and pulled his knife to engage the sith. After a short but brutal fight. Gav, utilizing his gift for psychological warfare and prodigious talent with Telekinesis, defied the odds and killed the Togruta sith in single combat, using the force to throw his knife, burying it into the evil warrior's throat.

Shortly after the fight, Gavin again met Master Concordia, as well as another jedi, the famous Master Kel'al Raganella. They both seemed shocked and surprised by the fact that a mere learner, who had yet to even be taken as a padawan, had slain a sith lord with nothing but Matilda, a training saber, and a combat knife. Gavin took this as encouragement, believing that he had finally found his calling.

Gav is a restless spirit, filled with the adventuresome nature of his corellian spacer parents. Most of his life decisions have been in pursuit of the elusive something more. He longs for adventure, and can be a bit of thrillseeker. However, he is loyal and honorable, and protective of those he calls his friends. He, like many soldiers, is a bit blunt and crass, with a weakness for smoking cigarra's and drinking. He is incredibly brave, and skilled leader of men, the combination of which earned him first class bloodstripes during his time in the army.

Gavin was trained by his parents first and foremost, adventurous corellian spacers who knew the value of when to throw hands, when to draw blasters, and went to run for it. His time spent with his parents and drifting the galaxy with Thor gave him a serious case of wanderlust. He is an expert shot, and skilled hand to hand fighter, with, as a CO once said, "a gift for getting back up". He is also an accomplished pilot and natural mechanic, having souped up Ace of Sabres far beyond its stock specifications. He can also speak Basic, Huttese, Shyriwook, and knows a bit of Olys Corellisi

Though proficient in many weapons, Gavin only carries three with regularity. Like and good jedi, his lightsaber never leaves his side, where he wears it on the left as per tradition. It is a simple wrapped hilt, reminiscent of older weapons and the jedi katanas his master carries. it contains a yellow pontite, a phond, and a krayt dragon pearl and produces a yellow blade. Slung low on his right thigh is his oldest friend, a bryar pistol given him by his father. She is named Matilda and he will go nowhere without her. Finally he carries a knife that he carried as a commando in the army.

Gavin was originally inspired by Malcolm Reynolds of the television series Firefly, created by Joss Whedon. He has since, through additional inspiration and drunken musings by his creator, departed a great deal from the original source material. Parts of his backstory, such as the name of his unit and his ship are used in tribute to that original inspirational moment. He was also a named Malcolm Rennoh at first, but due to some artistic issues I was having recieved a major overhaul. There is also a lot of myself in this character, perhaps more then any of my others.

Gavin Terrik is played on JvS by Dan Daugherty. 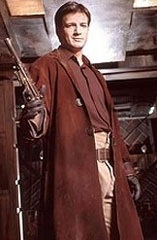 Retrieved from "https://jvs.fandom.com/wiki/Gavin_Terrik?oldid=26055"
Community content is available under CC-BY-SA unless otherwise noted.